23 Ceilings Worth Craning Your Neck For - Atlas Obscura
Want to see fewer ads? Become a Member. 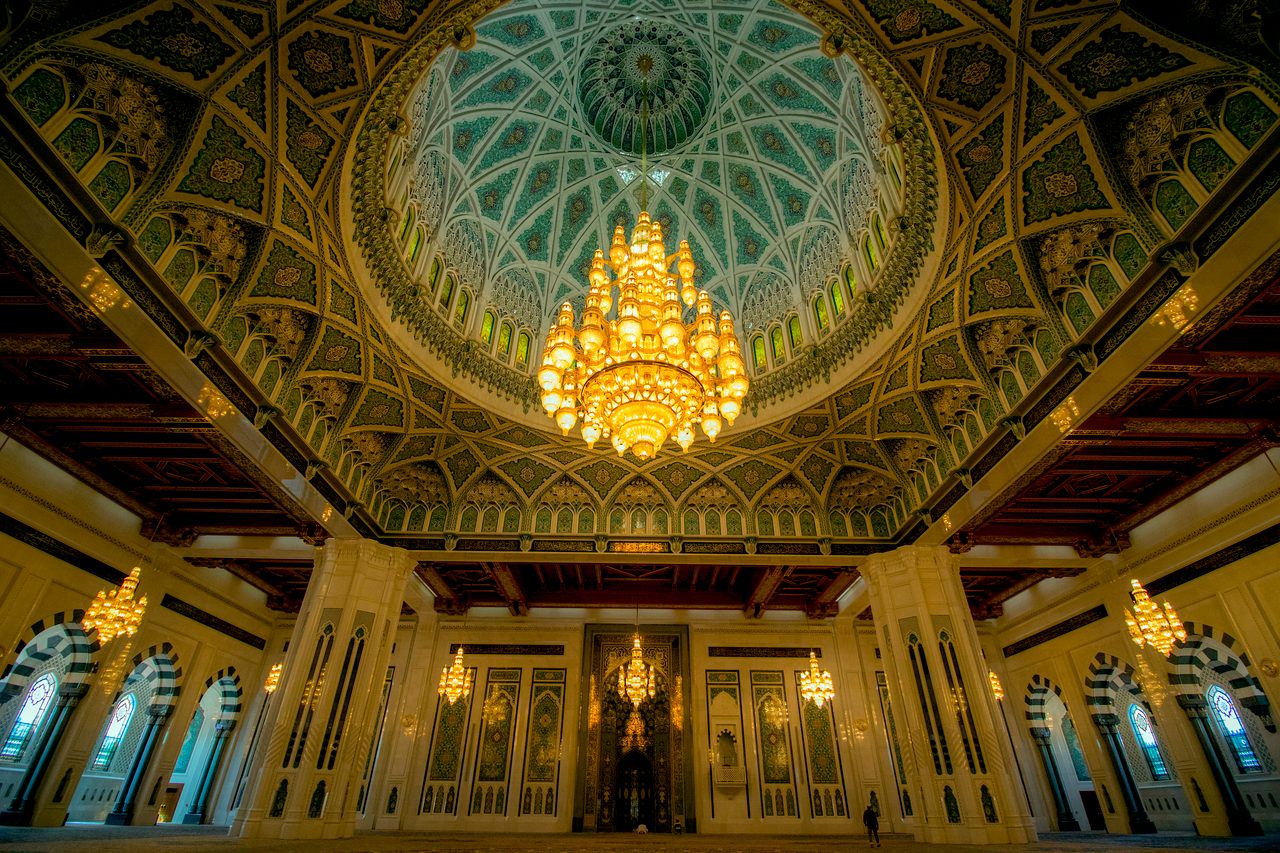 Hello up there. Mostafameraji/CC BY-SA 4.0
In This Story
Place

This spectacular mosque houses the second-largest chandelier in the world.
Place

Bold black and white motifs of life and death add a dramatic flair to this 17th-century crypt.

There’s wonder all around, but it’s easy to forget to look up. There’s the ever-mutable sky up there, and for centuries, architects, artists, and designers have tried to outdo it, often in churches, libraries, mosques, and museums. Many of those buildings save their greatest, most jaw-dropping sights for their own versions of the heavens: ceilings. We recently asked the readers in our Community Forum to tell us about the most startling ceilings they’ve ever encountered. What we found was heavenly (unsurprising, since many of them reside in houses of worship) and worth all the neck strain.

Take a look at some of our favorite submissions below, and if there’s an incredible ceiling you’d like to tell us about, head over to our forums and keep the conversation going! Here are some ceilings just bursting with the vision and artistry of a dozen Sistine Chapels.

“I went to the Basilica of Santa Maria de la Victoria in Málaga and, looking straight on at the altar, you can’t immediately tell that there’s a room behind it that you’re actually looking into. Then there are signs that direct you to continue upstairs to check it out.” — alexaharrison

“I was quite literally walking around Vienna looking for a place to pee. I went into the Austrian Academy of Sciences and found this awesome ceiling in their main meeting hall.” — tralfamadore

“I recently visited Hampton Court specifically to see the wonderful carpentry work of the hammerbeam roof of King Henry VIII’s Great Hall. It was designed to impress, and it still does.” — Jaguarfeather

“In the spirit of the grand, sacred, painted cathedral ceilings offered here, I submit one from the Dalí Theatre-Museum in Figueres, Spain (Catalonia), in which Dalí has shown himself, and his beloved wife and muse Gala, from the soles up, holding up a portal to heaven … as Dalí imagined it. My favorite aspect is the way he, in an uncharacteristic gesture of modesty, tucked Gala’s dress close to her legs to as not to give a view that was TOO inspiring, and the drawers emanating from his own midsection.” — johnpendleton

“Definitely seconding Chiesa di Sant’ Ignazio di Loyola. The ceiling, by Jesuit Brother Andrea Pozzo, opens up and invites the viewer to gaze into the heavens. Figures representing the four corners of the world beckon to the global missionary reach of the Jesuit order. Above the transept, Pozzo created a false dome, tricking the viewers as they approach.” — malawijay

“The complex vaults of the lofty King’s College Chapel, which I got to see at Cambridge University in England.” — Philip_Shane

“The fan vaulting at King’s College Chapel in Cambridge and the elliptical dome of San Carlo alle Quattro Fontane in Rome are two of my favorites, among many. There are so many good gothic and Renaissance examples, I’m challenging myself (and anyone else curious) for good modern examples also.” — MisterCustomer

“Stumbling upon the Strahov Library in Prague was a beautiful surprise. Such a hidden gem. And the sweet docents are an added bonus <3.” — alisalynn

“The recently restored Jefferson Building at the Library of Congress in Washington, D.C., has beautiful ceilings.” — kld123

“I can’t pick the most incredible, there’s just too many. But the Alhambra in Granada, Spain, has SO many amazing and intricately carved ceilings.” — jfrzr

“The Cathedral Basilica of Saint Louis in Missouri is an amazing, beautiful example of the art of mosaic.” — feathrd1

“A former movie palace (it still has the organ, which is used to accompany films during the summer movie series), which was restored and is now home to the Columbus Symphony and national tours of Broadway shows.” — QSAT

“My favorite ceiling is in the Chiesa Santa Maria Dei Miracoli in Venice. Every painting in the coffered ceiling is different.” — sdmichalove

“The Grand Mosque of Oman was incredible.” — mackenzieprice13

When New Yorkers Were Menaced by Banana Peels

They slipped and fell. Really!
buildingsinfrastructuredesignarchitecture

Medieval Cathedral Spires Have Been at Risk From the Get Go

For centuries, they’ve been toppled by lightning, wind, and more.
architecture

Think your city doesn’t like you? You’re right.
maps

During the winter months, the iconic French site casts a perfect shadow on a bay full of history—and quicksand.
Video • AO Docs