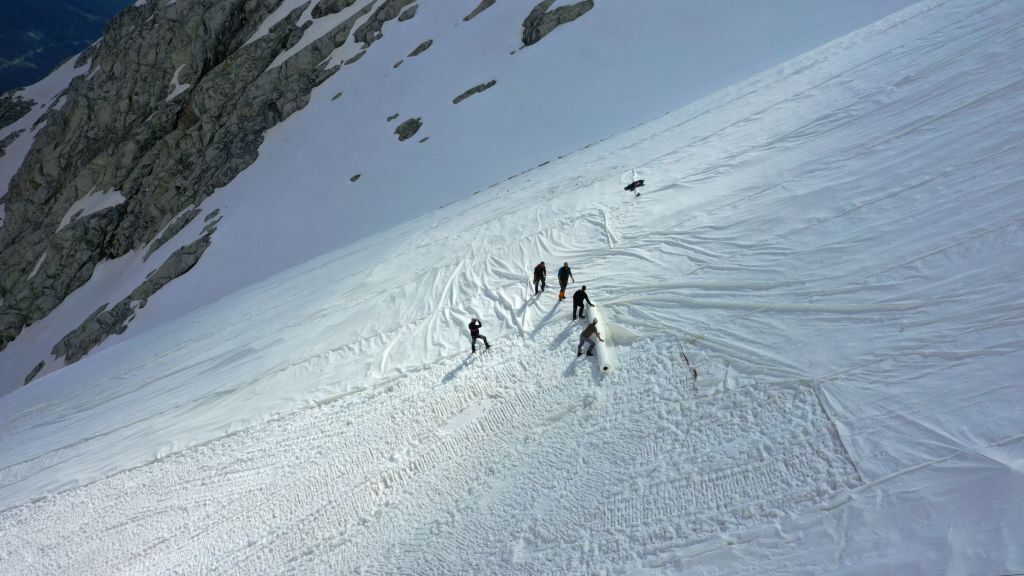 What do you do when your 200-acre glacier—a “Giant of the Alps”—begins to melt from climate change? For a ski resort in Italy, the answer is simple: Put a tarp on it.

Sitting on an Alp called Presanella in the northern part of the country, the Presena Glacier is home to a lucrative ski tourism industry. The Pontedilegno Tonale resort operates ski lifts on the glacier, inviting visitors to ride cable cars up the mountain and warm up in glamorous huts “equipped with all comforts,” including a Finnish sauna and a lava stone Jacuzzi pool.

But rising temperatures put this all at risk. The region is warming fast, endangering Pontedilegno Tonale’s ski business and nearby mountain communities that depend on tourism. Since 1993, the Presena Glacier has lost one-third of its volume, and the region is warming faster than the rest of the world. A report last year from the European Geosciences Union predicted that 90 percent of the Alps’ present-day glacier volume could be gone by the year 2100.

To slow the melt, Pontedilegno Tonale embarked on what it calls a conservation project: Each summer, from June to September, it spreads massive “geotextile tarpaulins” over the the glacier’s surface. In recent weeks, a crew from the company Carosello-Tonale began laying big white tarps that reflect sunlight and keep the underlying snow and ice cool.

Workers spread strips of tarp by hand, rolling each $450, 231-by-15-foot section down the slopes. After sewing the strips together, they place bags of sand on top of the tarps to prevent them from blowing away. The whole process takes six weeks to complete, and removing the tarps in preparation for ski season takes another month and a half.

When it comes to climate change, ski resorts throughout the Alps have been feeling the heat more than other regions. A 2014 report found that the Austrian Alps had already warmed by almost 3.6 degrees Fahrenheit since 1880, compared to a worldwide average of 1.5 degrees F. Toasty winter temperatures of 50 degrees are now commonly observed in the Italian Dolomites, where skiers glide down the slopes wearing T-shirts and no gloves. In the French ski town of Chamonix, in the shadow of Mont Blanc, snow accumulation has been cut in half over the past four decades, and the melting Mer de Glace (Sea of Ice) glacier threatens to disrupt what was once the world’s longest ski run.

Overall, reduced snowfall and a receding snow line (the lowest point at which snow lasts year-round) have helped to shorten the Alps’ average ski season by more than a month since 1960. As a result, according to a report in the Guardian, more than 200 ski resorts have shuttered. Those that remain, like Pontedilegno Tonale with its huge tarps, have had to take action to protect their slopes.

In France, the Val d’Isère makes its own snow. Using 650 powerful cannons, it blasts fresh powder onto the mountain, producing up to 282,000 cubic feet every hour. Other resorts, like the French Courchevel, opt for “snow farming,” taking snow from the coldest months of January or February and stashing it away under several inches of wood chips. The wood chips preserve the snow, which resort managers then unearth and spread back over the mountain when it’s time to begin the ski season—kind of like recycling, but for snow. The Swiss resort of Davos says it can retain up to 80 percent of the snow it covers by using this method.

Franco del Pero, one of the leaders of the project to slow the Presena Glacier’s melting, told Agence France-Presse the tarps are working. “When we remove them in September and we see that they did their job, we feel proud,” he said.

But it’s hard not to feel somber about the lengths resort owners have gone to cling to the melting snow and ice. A snowy winter, expansive ice sheets—these things used to be a given. Now, skiers worry they could be disappearing for good. According to the École Polytechnique Fédérale in Switzerland, even a global temperature rise limited to 3.6 degrees Fahrenheit would cause a 30 percent loss in Alpine snow cover by the end of the century.

Help us keep them coming by directly supporting Atlas Obscura.
Become a Member
$5/month $10/month $20/month
See All Membership Options
Already a part of our membership program? Sign in.
No Thanks
Keep Exploring
mountains

Found: The Body of a Hiker Missing for Thirty Years

A melting glacier revealed the frozen hands and feet of a man who disappeared in 1987.
science

Glacier Research Is Particularly Treacherous at the 'Third Pole'

An Elegy for Colombia's Tropical Glaciers

"We are the place on Earth where glaciers shouldn't be, and they are here.”
grottoes

As glaciers and ice sheets keep dwindling, scientists are proposing everything they can think of.
Video • PinDrop

A plaque will soon mark the site of Okjökull, one of Iceland’s dearly departed.
Read more
Thanks for sharing!