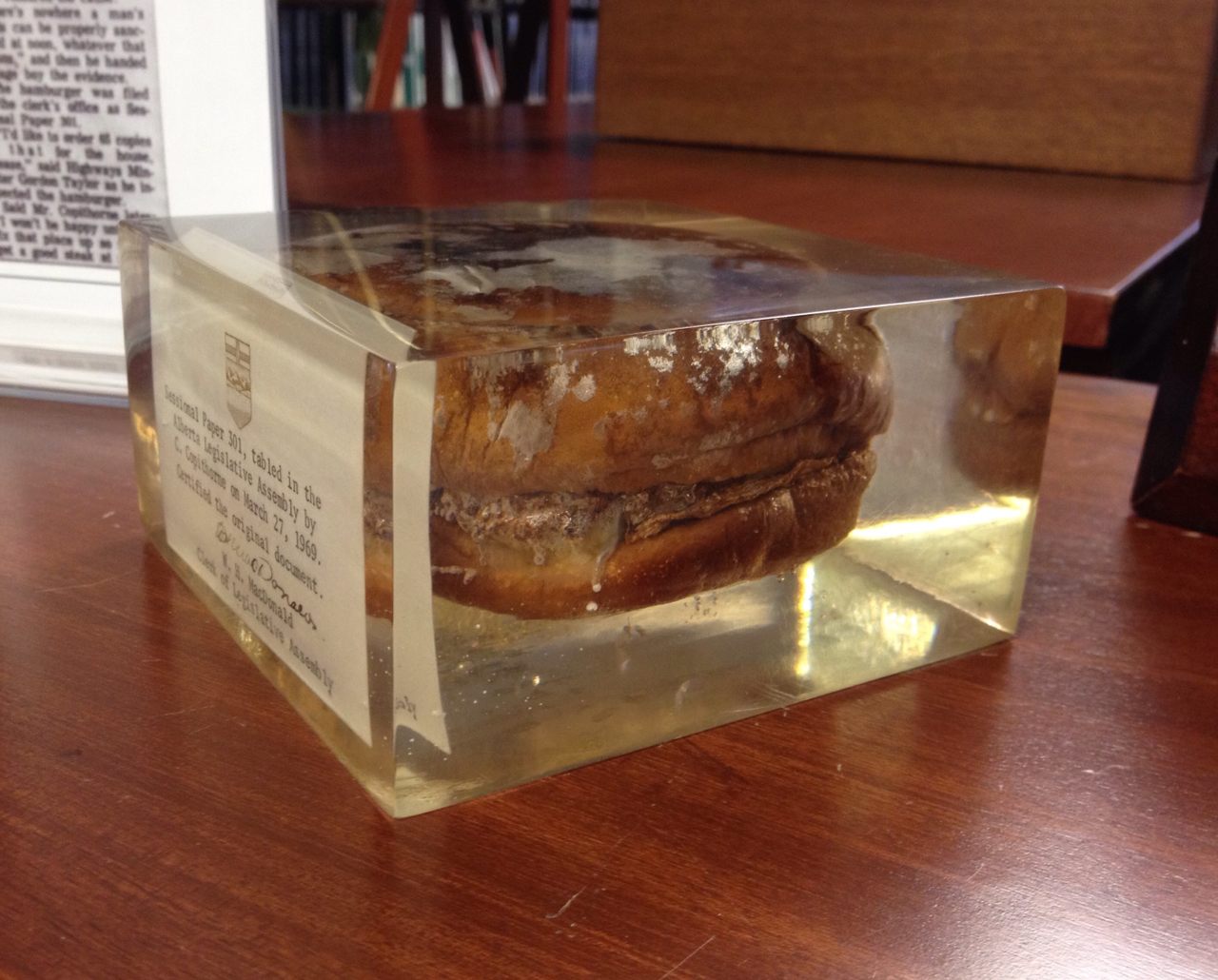 A burger from 1969, encased in plastic. Michael Hingston
In This Story
Destination Guide

Budget debates aren’t always the most interesting of processes. But a single throwaway gesture made in the middle of one, more than 50 years ago, led to one of the strangest items you’ll find inside a government library: a plastic-encased hamburger.

The year was 1969, and the members of the Legislative Assembly of Alberta, Canada, were debating an interim supply bill. During the discussion, an independent member named Clarence Copithorne rose to his feet and offered a suggestion of his own. “When talking about supply,” the representative for Banff-Cochrane told the sitting Social Credit front bench, “one thing they should supply us with right upstairs is good nourishment at noon.”

Copithorne then reached into his desk drawer and pulled out a rather limp hamburger, complete with relish and onions, from the Legislature cafeteria. “This will give you something to look at,” he said. “The honorable ministers can ask themselves why they can’t do something about this.”

The Assembly seemed to agree with Copithorne’s assessment of their lunch menu. His demand was met, according to the Edmonton Journal, with “hearty deskthumping from both sides of the house.”

It was a theatrical move, to be sure, and perhaps partly motivated by bureaucracy-induced cabin fever. But Copithorne took things a step further by officially tabling the hamburger with the clerk of the Legislative Assembly. And once he did that, the burger was no longer just a foodstuff—it was now the official property of the Legislature. As such, the burger was given a sessional paper number (301/69), and then sent to be duly filed along with all of the other governmental reports and correspondence in the library directly underneath the chamber.

At least, it was supposed to be. What happened next is a bit of a mystery. While the documentation about the burger moved to the library, as planned, the burger itself disappeared. (This isn’t unique in the province’s food-tabling history: a loaf of bread, baked by students at Hairy Hill School, was similarly tabled by a representative in 1978, but all that remains is a piece of paper acknowledging its existence.)

It wasn’t until 2006—nearly 40 years later—that the burger resurfaced. Copithorne’s son contacted the Legislature library and mentioned that he had found it, now bizarrely encased in a block of resin, alongside a signed note from the then-clerk of the assembly, in his father’s garage, years after his death. Nobody is sure exactly when or how, but it is believed that the burger was entombed this way, shortly after the original tabling, and then presented to Copithorne as a gift.

Did the library want this, er, “official document” back? They most certainly did.

Today, the plastic-encased hamburger lives on in the Legislature library as originally intended, just a few feet underneath the desk drawer out of which it was first produced. The burger itself floats in the middle of the translucent brick, looking fairly well preserved, if not exactly appetizing. Beads of what appear to be condensation are visible on the top of the bun, suggesting it was freeze-dried first.

Rather than being shelved alongside the other papers from the second session of the province’s 16th Legislature, however, Copithorne’s burger is given special prominence, as part of a locked cabinet of curiosities that greets you a few steps inside the library. Also included are a piece of light-rail transit track, an unopened can of golden caviar, and an old bag of dirt from the banks of a controversial proposed dam project.

Alas, the plastic-encased hamburger isn’t likely to gain new neighbors any time soon (whereas encased hot dogs seem privy to a different fate). In 2002, the Legislature’s standing orders were amended so that only paper-based items can now be tabled. “We don’t get lovely stuff like this any longer,” says Heather Close, the library’s reference and research services coordinator. “Which is OK, because we’re not really cut out for it.”

The library, she says, has a responsibility to retain and maintain the many official documents of the provincial government. “It’s pretty tough to do that with a hamburger.”

Found: The Highest Wave Ever Detected by a Buoy

Ten hits of acid led to one powerful testimony.
objects of intrigue

The Treasures Within the World's Greatest Wine Library

This California collection is a trove of wine books and rarities.
objects of intrigue

Was This Letter Written by Sherlock Holmes?

If you are “Playing the Game,” the answer is elementary.
Video • PinDrop

Try the alligator at this fondue spot, which has been catering to "lovers and hedonists" since 1967.
Calgary, Alberta

What happens when a chef with indigenous roots takes over a hotel-restaurant?
Wayne, Alberta

This ghost-town bar has bullet holes and plenty of stories lurking within its walls.
Calgary, Alberta

One of the last remaining buildings from one of Calgary's earliest businesses.
Want to see fewer ads? Become a Member.
From Around the Web
THE GASTRO OBSCURA BOOK
Taste the World!
An eye-opening journey through the history, culture, and places of the culinary world. Order Now