Acorn Woodpeckers Have Multi-Day Wars, and Birds Come From All Around to Watch - Atlas Obscura
Want to see fewer ads? Become a Member. 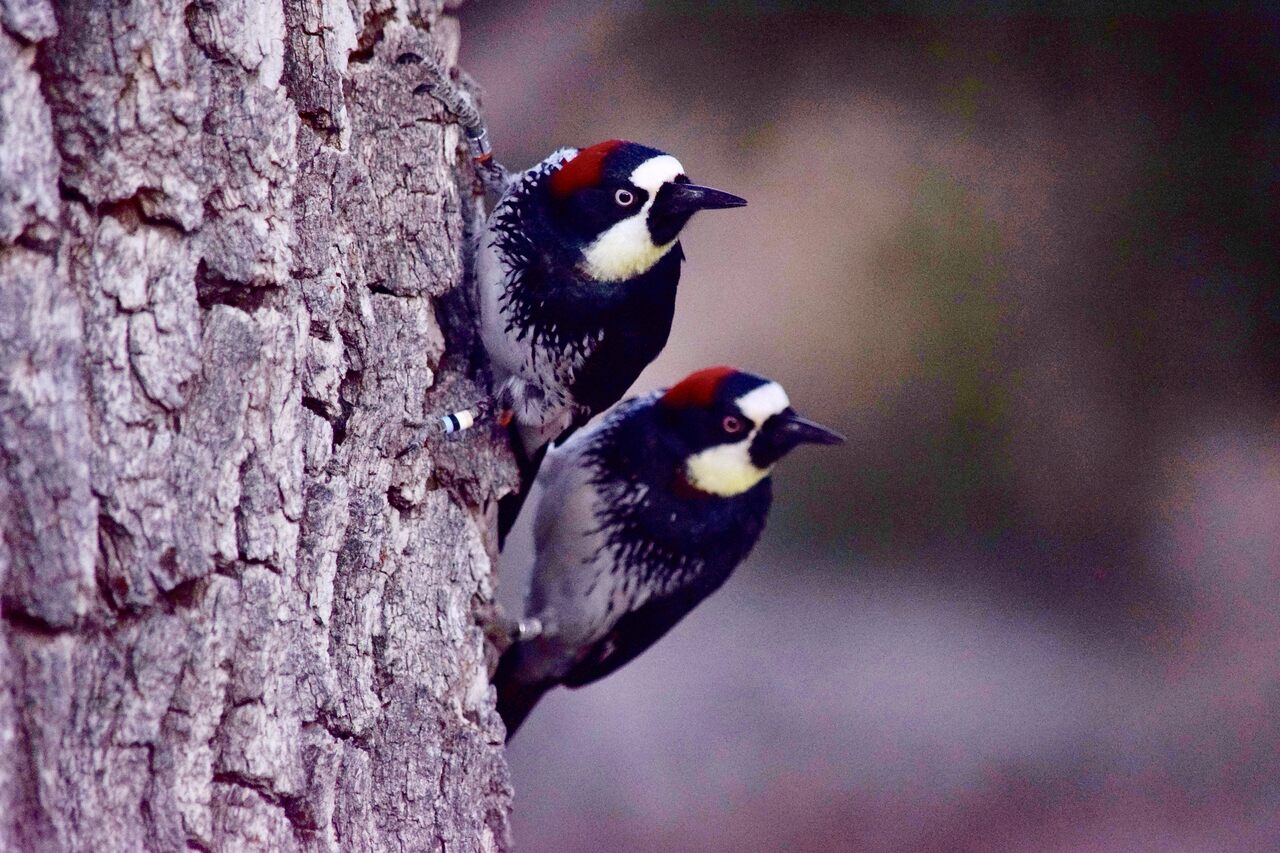 Spectators to the power struggle can come from miles around. Copyright Russell E. Winter
In This Story
Destination Guide

Power struggles are messy affairs, even in the world of acorn woodpeckers. Dozens of birds, grouped in coalitions, can fight for days on end, while spectators fly in from nearly two miles away to witness a battle for the right to breed. And word spreads fast—when a bird’s death creates a vacancy in prime territory, the battle to fill it breaks out within minutes, and faraway onlookers can arrive in less than an hour.

These are some of the findings from a study, published in Current Biology, that followed a California population of these unusual, socially complex birds. The immense and arduous effort required to win a key place within a territory’s pecking order is matched by an equally rare prize: a breeding position within a communal group of birds that raises offspring together and shares valuable stores of acorns that help them tough out food shortages. But the toll of a battle can be great.

“You can see birds with eyes gouged out, with blood on their plumage—they fall to the ground holding each other’s legs when they’re fighting,” says Sahas Barve, lead author of the study and a postdoctoral fellow at the Smithsonian National Museum of Natural History. “These birds have spears for mouths so they can do a lot of damage.”

The jumble and chaos of a power struggle make it difficult to parse visually what is happening, so Barve and his colleagues, from Old Dominion University in Virginia, the University of California, Berkeley, and the Cornell Lab of Ornithology, used radio tags to track the movements of birds at Berkeley’s Hastings Natural History Reservation. They were surprised to discover so-called “warrior” birds spending up to 10 hours a day over multiple days in battle, and spectators leaving their own territories for an hour or more just to watch, says Barve.

The study sheds more light on a species that exhibits complex social networks and behavior. Acorn woodpeckers live in groups of up to 16 birds in oak-tree habitats that range from Oregon and California to Mexico, Central America, and northern Colombia. (The late summer 2020 wildfires afflicting the West Coast have burned parts of the 2,500-acre Hastings reserve, including several woodpecker territories with acorn “granaries” built up over generations, says Barve.)

Each social group has multiple male and female breeders that raise each other’s chicks, helped by older, nonbreeding offspring that haven’t yet found territories of their own. The breeders cannot identify which chicks are theirs, but take aggressive steps to ensure their eggs are part of a communal clutch. (Females, for instance, may destroy the eggs of another bird so that everyone lays at the same time, says Barve.)

To guarantee adequate food when flies or other insects are scarce, the birds drill holes into the thick bark of oak trees, or into structures such as utility poles, for acorn storage. Over time, each granary accumulates many holes—from a few hundred to tens of thousands—making the bigger ones highly coveted territories. Acorn woodpeckers have been shown to be keen strategists and fierce protectors of these territories.

When all the breeders of a particular sex have died or disappeared from a social group, a power struggle is triggered. Only birds of the same sex will arrive to compete in the battle, which pits coalitions of two or three birds against one another until a single group is victorious. (Female bands are often composed of sisters or a mother with helper daughters seeking to breed on their own.) The study found up to 12 coalitions partaking in a single battle, which can last five days to a week, for a large granary. A battle can be so raucous, says Barve, it can be heard a football field away.

The benefit for spectators, who watch from nearby trees before returning to their home ranges, is not entirely clear, but the risk they take suggests that they gain useful information. Acorn woodpeckers are known to recognize relationships outside their own groups and keep track of membership changes in other territories. A previous study on the Hastings population showed that the birds do regular reconnaissance, visiting an average of six territories a day, says Barve.

“They’re keeping really close tabs on who lives where, how they are related, which bird should be where, and all of that,” he adds. Thus, word of a power struggle travels fast. “These radio tags are helping us unravel hidden movements of the woodpeckers. They’re much more complex than we thought.”

The Detective on the Case of the Perfect Hot Tamale

With a new train line threatening its habitat, the big cat may be the key to protecting this Mexican reserve—and everything else in it.
snakes

An endangered species is thriving at a once-blighted lot, but climate change and other challenges threaten its future.
animals