8 Alien Landscapes Where You Can Visit Mars on Earth - Atlas Obscura
Want to see fewer ads? Become a Member. 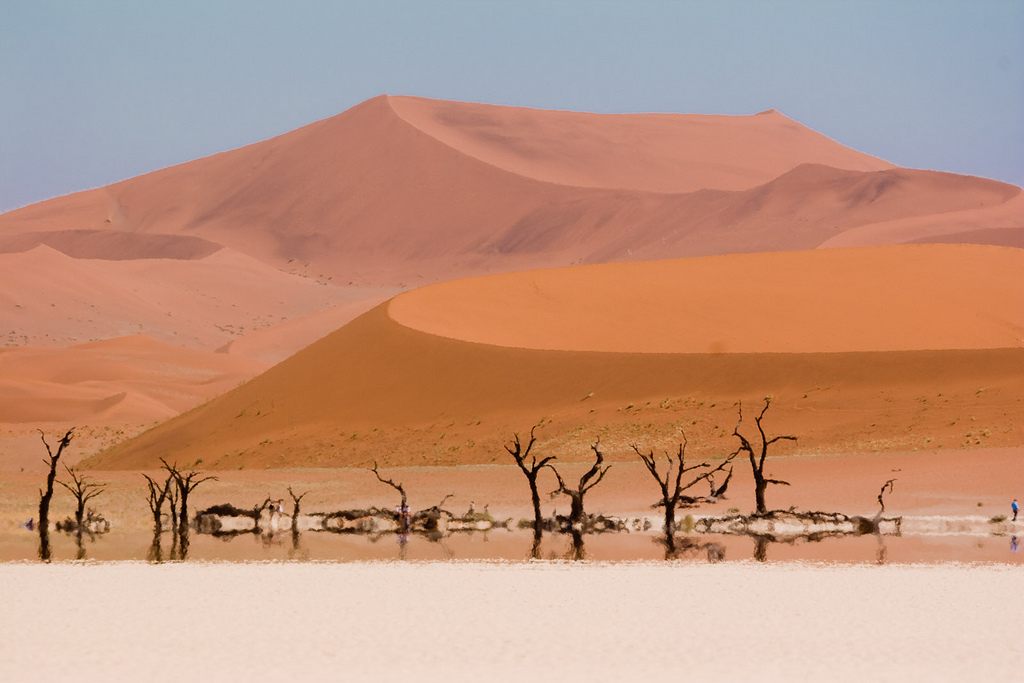 The closest thing to Mars on Earth.
Place

The villagers of the coldest inhabited place on Earth adjust to unique challenges presented by day-to-day living.
Place

This tumultuous Icelandic lava field looks so alien European researchers want to use it as a stand-in for Mars.

SpaceX’s Elon Musk is certain that humans can travel to Mars. In his plan for Mars colonization, revealed today, the entrepreneur said it will take between 40 and 100 years to create a self-sustaining city on the Red Planet—once we manage to get there. But space-lovers who dream of setting foot on cold, red Martian soil don’t have to wait for scientists to conquer human spaceflight into deep space, or figure out how to grow potatoes on Mars. Some landscapes here on Earth are just as formidable.

These terrestrial landscapes have characteristics similar to the harsh terrain and extreme environment on Mars, from barren lava fields to dangerously cold climates. Some are even currently being used as Mars analogs by researchers with the aim of one day becoming an interplanetary species.

Others simply appear so alien as to be straight out of science fiction, the Martian landscapes of space explorers’ dreams. Here are eight places in the Atlas where you can visiting Mars without waiting for a SpaceX rocket.

The uniquely rippled sand dunes that cover much of Mars are unlike anything found on Earth, but these towering red dunes in the Namib Desert are about as close as you can get to that aspect of the planet’s terrain. The rich red dunes in the Sossusvlei clay and salt pan, among the tallest in our world, owe their hue to age—over the thousands of years, the sand has literally rusted.

Among these old red dunes is an even more otherworldly landscape known as Dead Vlei or “dead marsh.” Some 900 years ago the climate dried up, and dunes cut off Dead Vlei from the river. It became too dry for the trees to even decompose. They simply scorched black in the sun, monuments to their own destruction. It is a strange and alien landscape indeed.

The average temperature on Mars is -80 degrees Fahrenheit—a freezing climate you would assume was too cold to support human life. But not so fast. Positioned deep in Siberia, just a few hundred miles from the Arctic Circle, the village of Oymyakon holds the distinction of being the coldest permanently inhabited place on Earth, reaching record lows of -96.16 degrees Fahrenheit. The hardy 500-some residents of Oymyakon certainly don’t have it easy, however: If you were to go outside naked on an average day, it would take approximately one minute for you to freeze to death.

190 million years ago, one of the greatest geological formations began to take shape. In the Coyote Buttes ravine, some 5,225 feet above sea level, stands Arizona’s The Wave. The Wave has a remarkable undulating appearance, with massive sandstone structures stretched like taffy, and cinnamon color strata domes. It is, in a way, a geological snapshot in time. Many describe walking through the dunes as an intensely strange experience, surreal and vertigo inducing.

This five-story, blood-red waterfall pours very slowly out of the Taylor Glacier in Antarctica’s McMurdo Dry Valleys. Roughly two million years ago, the glacier sealed beneath it a small body of water which contained an ancient community of microbes. Trapped below a thick layer of ice, they have remained there ever since, isolated inside a natural time capsule. The trapped lake has very high salinity and is rich in iron, which gives the waterfall its red color.

The existence of the Blood Falls ecosystem shows that life can exist in the most extreme conditions on Earth. It does not prove, however, that life could exist on other planets with similar environments and similar bodies of frozen water, notably Mars. Even if it doesn’t confirm the existence of extraterrestrial life, Antarctica’s Blood Falls is a wonder to behold, both visually and scientifically.

If you’ve ever longed to walk upon the barren red terrain of Mars, experiencing Námaskarð will get you close. Situated on the north side of Iceland’s Lake Myvatn is a geothermal wonder of hot sulfuric mud springs and steam springs (solfataras and fumaroles if you’re a geology nerd).

Black rivers and bubbling pools of sulfuric mud cut through a landscape that’s rich in colorful minerals and is continuously steaming. It is a magnificent example of how strange and unearthly our planet’s natural landscapes can be.

For many years Ascension Island was a barren wasteland of lava fields whose dry climate and lack of fresh water made it inhospitable. It wasn’t until 1815 that the island became permanently inhabited, as a military prison. But it was a botanist named Joseph Dalton Hooker, at the encouragement of Charles Darwin, who would devise a plan that would radically change the island’s habitability in what was one of the most successful ecology experiments of all time.

The idea was that planted trees would capture rain and make the soil fertile, transforming the stark landscape into a lush garden. It effectively turned Ascension into an island oasis, and in the process became one of the very first experiments in terraforming. While Ascension Island remains relatively unknown today, the success of the island’s artificial ecosystem, which is one of few large-scale planned forests in the world, has given hope that the colonization of Mars is possible.

Located on the other side of the Ring Road from Námaskarð, the Krafla Caldera is a 10 kilometer-long, two kilometer-deep active volcanic zone on the boundary between the American and Eurasian tectonic plates, and a key component of the eerily Martian-like landscape of the Myvatn area.

Black and red lava fields, the unearthly bubbling pools of mud, volcanic craters, and gently wafting thermal plumes lend the Krafla zone a distinctly sci-fi air, creating a scene where a primordial past appears to meet a sustainable future. This Icelandic lava field looks so alien that European researchers plan to use it as a stand-in for Mars; the Krafla zone will host the European Mars Analog Research Station, designed by the Mars Society to observe living conditions for human beings in Mars-like conditions.

The Haughton Crater is one of the world’s northernmost impact craters, formed roughly 23 million years ago when a large rock hit the Earth near in what is now Northern Canada. It’s also about the closest thing to Mars on Earth.

Situated in the Arctic Archipelago, the crater lies in a type of polar desert environment called a “frost rubble zone.” It’s the only impact crater known to exist in such an environment, and despite being 23 million years old, has undergone little erosion due to the lack of liquid water and vegetation in the area.

These factors, along with the crater’s geology, make the freezing, desert-like landscape an ideal location for the base of the Haughton-Mars Project, where scientists will practice for a future Mars mission.

You Can Now Listen to the First Computer-Generated Music Ever

Join us for a daily celebration of the world’s most wondrous, unexpected, even strange places.
birds

The mineral mirabilite is the key.
forests

18 magical places on Earth that seem straight out of a fantasy world.
Video • AO Docs